The Canadian Center for Experimental Radio Astronomy is a membership association which supports education and research in radio astronomy techniques and applications targeted at smaller institutions and interested individuals. We are federally incorporated as a not-for-profit in Canada.

We operate an observatory and research centre near Smiths Falls, Ontario, Canada.

You can find an excellent introduction to Radio Astronomy here 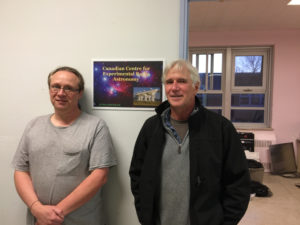 Marcus has worked in the technology development industry in both software and hardware, since 1979. He spent 19 years at Nortel, including 8 years in the office of the CTO as an advisor on network security standards. He was involved in the IETF for many years, including chairing several working groups, and spent four years as security-area director in that organization. He is the author of several IETF RFCs.

Marcus has several patents in the areas of cryptography and network security.

He has been involved in small-scale radio astronomy since the late 1980s, and in 2004 began investigating and “evangelizing” Software Defined Radio for use in radio astronomy experiments. His papers on the subject can be found in the proceedings of our sister organization, The Society of Amateur Radio Astronomers.

Marcus is a licensed amateur radio operator, with callsign VE3MDL

Gary is a veteran of the aerospace industry, having spent most of his career in Space Hardware Integration and Testing activities for the Canadian Space Agency. He was involved in a range of areas from Space Simulation to Structural Qualification testing on most Canadian space programs and numerous international programs.

Programs ranged from Anik C series of satellites to the Radarsat series, and from MOST and SCISAT to the fine-guidance system of the James Webb Space Telescope.

Gary was the driving force behind getting access to a large earth-station dish, owned by the CSA, and which was the centerpiece of the joint project at Shirleys Bay. The project came to an end in 2013 when the CSA decided to dismantle that dish, to make room for other tenants of the same campus.

Mick is a physics major and IT professional who survived a 30-year career in Kenya with the UN Environment Programme. He is the only Australian to have lived in Africa and voluntarily retired to Ottawa. Mick has been an astronomy junky since pre-school, and has owned (and broken) many optical telescopes. This is his first foray into radioastronomy. Mick also supports web services for the Royal Astronomical Society Ottawa Centre and can sometimes be found at their monthly public star parties.