Memo 0005: A “thermal stage” for a radio telescope front-end

Memo: 0005 A “thermal stage” for a radio telescope front-end

Subject: A “thermal stage” for a radio telescope front-end

This memorandum describes the design and build of a simple “thermal stage” for the front-end of a 21cm radio spectrometer. It is designed to control both the LNA gain stability (via temperature stabilization), and the temperature of a passive termination.

Gain stability in low-noise amplifiers in the so-called “front end” of a radio telescope is a significant concern to radio astronomers and the engineers responsible for designing and deploying radio telescope systems.

When LNAs (low-noise amplifiers) are “left to their own devices”, they will exhibit small change in apparent gain proportional to the ambient temperature. These changes are small in magnitude, but more than large enough to be a significant annoyance, or even to render certain types of data analysis near-impossible. The problem is that many of these small gain changes occur at time and magnitude scales that are similar to those made by astronomical objects transiting the beam.

In major radio astronomy observatories, the issue is usually addressed by maintaining the low-noise amplifier chain (usually the first 30-50dB of gain) within a temperature-controlled, extremely-cold, envelope. This invariably requires exotic multi-stage refrigeration units operating from liquid nitrogen, or liquid helium. This achieves both temperature stability, and very-low absolute temperature, which reduces the effective noise-temperature of the amplifiers.

The average “back yard” radio astronomer is unlikely to have access to such exotic equipment, nor the patience and time to keep it running and filled with coolants.

It is possible to construct a “thermal stage” for LNA devices that uses Peltier-effect devices to lower the temperature of the LNA by 10 to 20C degrees below ambient. This initially appears to be a very attractive option. However, in practice, the positive effects on the noise temperature of the device are generally outweighed by the significant complexity of Peltier-device management, and getting rid of the waste heat of the Peltier stages themselves. Further, in many environments, there are unpleasant condensation issues that cannot be ignored, and are complicated to deal with.

There will always be a slight penalty paid when raising the ambient temperature of an LNA, in that the noise figure (or noise temperature) will also increase slightly.

We chose to build a “thermal stage” for LNA upgrades to the CCERA spectrometer using PTC (Positive Temperature Coefficient) heaters as a heat source. The thermal stage provides a stabilized thermal environment not only for the LNA, but for a reference termination that provides a noise source with equivalent noise temperature to the physical temperature of the stage. In our case, we attempt to maintain the stage at 340K.

PTC devices are made from a special semiconductor ceramic material that is engineered to have a positive resistance coefficient with temperature, with a non-linear curve. The device maintains a fairly low resistance initially, and as current flow causes heating, the resistance increases rapidly up to a transition temperature. Once this temperature is reached, the resistance of the device increases rapidly, which, naturally, reduces current flow, which causes less heat to be produced. The result is a remarkbly-stable equilibrium steady-state that is predictable and reliable. The PTC devices are engineered to reach a specific equilibrium temperature, and we chose devices rated for 60C (approximately 340K). The devices draw a peak power of 20W at 12V, and are packaged in a convenient aluminum “slab”.

The CCERA spectrometer is used by undergraduates in an astrophysics program with a radioastronomy component to their coursework.

Various methods have been tried to provide for a “dark slide” or “spectral baseline” for the instrument. These “baseline” measurements are important in this type of work in order to reliably distinguish between spectral features that are inherent in the instrument, and those that arrive from the cosmos.

A passive RF terminator produces a noise power that is proportional to its temperature, described in a simple equation:

Where P is the power in watts, k is Boltzmann’s constant of 1.38 x 10-23 (with a charming chain of units that we’ve elided for clarity), T the temperature in Kelvin, and B is the observing bandwidth, in Hz.

When this is converted into units that are more familiar to RF engineers, this amounts to -174dBm/Hz at 20C.

We set a target temperature for our thermal stage of 340K, which is approximately 22 times the average black-body temperature of the sky at 1420MHz. Maintaining this temperature should be fairly easy to achieve in all kinds of weather. It is suitably above ambient even in the summer, and with simple insulation should be easy to maintain even in the winter.

With a stable passive-termination available, it should be usable as a “dark slide” to evaluate instrumental artifacts all the way from the LNA to the receiver chain. Although, one might reasonably call such a termination a “bright slide”, since it is much brighter than the average sky at these wavelengths. The main purpose of such a “bright slide” is to provide a consistent, uniform, noise source to evaluate receive chain artifacts.

A secondary (and quite useful) purpose of the stabilized termination is to provide a reference brightness temperature against which “sky” measurements can be evaluated, and reasonable and stable estimates for sky brightness can be produced.

A mechanism is required to allow the input to the LNA to be switched between the “sky” input and the “reference” input. There are various solid-state solutions, involving discrete PIN diodes or GaAsFETs, but they are “fiddly” either due to requiring +/- supplies, or only available in exceedingly-tiny SMD form, and thus exceedingly awkward for the back-yard experimenter.

Fortunately, surplus microwave compatible RF relays routinely become available via venues like eBay. We sourced two such relays, made by Dow-Key type 403-2308. These are SPDT relays that allow a common port to be switched between two other ports, and the relay coil accepts anywhere from 20 to 28VDC. These relays have a very low insertion loss, boasting a maximum loss of 0.15dB at 1.5GHz.

Two of the “thermal stages” are shown above. The PTC heater resides on the bottom, and the RF relay on the edge of the top. The 50Ohm terminator is strapped to the stage itself, to improve thermal transfer/stability, and the LNA will be connected to the middle, “common” port on the relay. The “sky” signal arrives on the short SMA terminated cable coming in from the right. 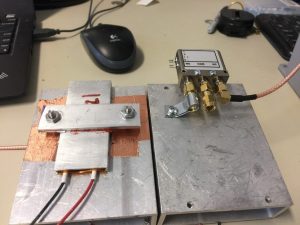 Two of the Thermal Stages

A future memo will discuss integration of an LNA module, and testing.